The age-old battle of between fundamental and technical analysis will always continue. Both methods of analyzing a stock are powerful and have their own strengths and weaknesses. However, in the stock market, prices are largely driven by the new information. The market participants assess the new information and analyse its potential positive or negative impact on the stock. Based on their perception of new information, they take buy or sell positions in the market. 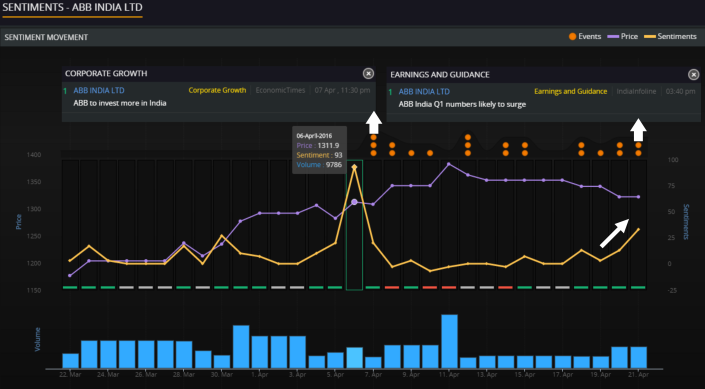 Over the last 10-years, we have seen massive explosion in the amount of information that is available on the internet. In this rapidly changing world, a stock, which looked to be a multibagger two months ago, can turn into a disastrous investment if the relevant news and sentiment around the stock is not tracked regularly. However, the huge amount of information is making it increasingly difficult for traders and investors to analyse the sentiment of each and every news.

Understanding the need, Heckyl launched sentiment engine in 2012. It allows a user to measure the sentiment of a particular news item or news flow around company and evaluate its potential impact in real-time. Sentiment score acts as the lead indicator and alerts traders and investors about impending upward or downward price movement in the stocks. We have taken example of ABB India to explain how sentiment score can be a useful tool.

Now the sentiment score started moving higher on expectations of better quarterly earnings. ABB India is expected to announce quarterly results on April 25. If results are announced as per expectations, then there is a high probability of share price catching up with sentiment score. Keep a watch on it!

Bottom Line:
Sentiment score can give early indication of upward or downward price movement in the stock. It can also offer a profitable trading opportunity by quickly identifying a gap between perception and actual reality. In short, one can not only survive in today’s markets but can also make profit by tracking sentiment around the stock in real time.

To know more, mail us at info@heckyl.com