Heckyl Sentiment index, which reflects a broad reading of collective sentiment for the Nifty companies, has turned mildly bearish for the 50-share index ending 2-month long bullish phase. Media sentiment for the broad-based index was in the bullish territory since the start of earnings season in April this year. The recent rate hike by the US Federal Reserve and selloff in technology shares weighed on the sentiment.

We have used the crossover of fast and slow moving averages of sentiment score to quantify media perception. Bullish and bearish signals are generated when two averages cross each other.

Heckyl sentiment score showed extreme pessimism for major IT companies within the Nifty. Indian IT sector has been reeling under pressure on concerns US President Donald Trump’s clampdown on visas, layoffs and automation may impact software exporters. 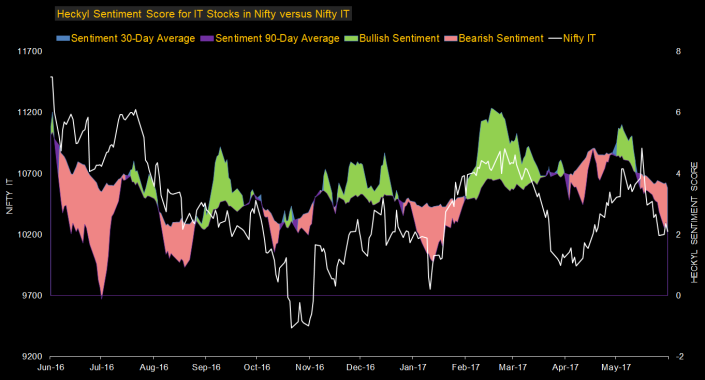 On the other hand, sentiment for major banking stocks in the 50-share index has been bullish since April 2017. The central bank’s crackdown on bad debt has fueled optimism in the banking sector. Recently the Reserve Bank of India (RBI) has directed banks to start bankruptcy process against 12 large loan defaulters to reduce NPA levels and thereby improve asset quality of lenders. 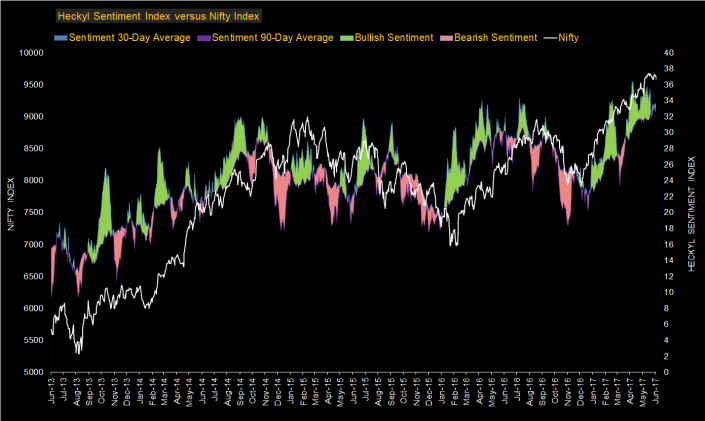 The Bottom-line:
Overall sentiment in the economy is buoyant as India is heading for the rollout of GST, the biggest tax reform in the country, from July 1. The market has already factored in the introduction of GST and its likely impact on the economy. Currently, the benchmark indices are trading at a lifetime high. On the other hand, media coverage has shown mildly bearish sentiment for the Nifty. It remains to be seen whether recent shift in sentiment will last long or it is a temporary phenomenon. A lot will depend on how the news flow will be for second quarter earnings season in the next month.

To know more about Heckyl’s News and Sentiment Analytics Platform, email us at info@heckyl.com